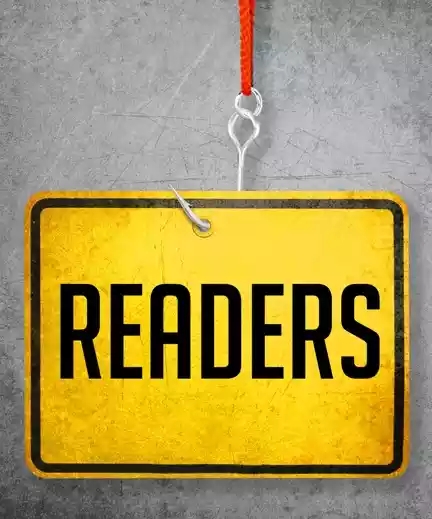 Surprise gets our attention by defying our expectations. We’re wired to immediately start figuring out what’s actually going on, the better to gauge whether we’re about to get whacked or kissed.

That’s exactly how a story grabs the brain’s attention: by instantly letting us know that all is not as it seems – yes, beginning with the opening sentence.

The reader’s first question is: “What’s this story about?” What they’re really asking is: “What problem does the protagonist have to solve, and what will she have to overcome to do it?” This is what’s known as the story problem, and it defines the protagonist’s story-long quest.

Think of the story problem as the yardstick that allows readers to anticipate what will happen next. A story without a yardstick is just a bunch of random events – and how boring is that?

Science has proved that the brain uses emotion, rather than reason, to gauge what matters to us and what doesn’t. Our feelings – not some “objective” logic — drive every choice we make. So it’s not surprising that when it comes to story, if we’re not feeling, we’re not reading.

This means that the protagonist must react to everything that happens, so we understand how she’s making sense of it. This is where the real story lies — it’s often reflected in the difference between what a character says (Yes, Reginald, of course I’ll marry you) and what she’s really thinking (as long as you promise you’ll never touch me).

3. Let Us In On The Protagonist’s Goal

Everyone has an agenda – you, me, and every protagonist worth their salt. We’re wired to be goal driven, and that’s a good thing. As cognitive scientist Steven Pinker so astutely says, “Without a goal everything is meaningless.”

Which is why we immediately need to know the protagonist’s agenda. In other words: What does he want? Even more important, why does he want it? And finally, what internal issue must he overcome to get it?

Why is this so important? Because everything that happens in the story gets its meaning and emotional weight based on whether it moves him closer to his goal, or further from it. If we don’t know what his goal is, we have no idea what anything adds up to, so the story idles in neutral.

4. Only Tell Us What We Need to Know

Over 11,000,000 pieces of information dive-bomb our five senses every second. Lest we be overwhelmed, our brain sifts through them at warp speed, separating what we need to know from what we can safely ignore. Thus, 99.9 percent of all incoming data is blithely discarded.

The same is true of a story. Your reader is wired to assume that everything you tell them is there on a need-to-know basis. That means if you introduce things we don’t need to know, we’ll read meaning into it anyway. And it will inherently be the wrong meaning, since there isn’t a “right” one. You can see where this is going. The most useful skill a writer can develop is the ability to kill their darlings, with gusto, if possible.

We don’t think in the abstract; we think in concrete images. If we can’t see it we can’t feel it, and so it has no impact on us. For instance, when you think of “love” you don’t envision a concept, you envision images that, for you, evoke the concept of love. Each of us probably sees a very different, specific image (fantasies of Johnny Depp notwithstanding).

In short, we access the universal only through the very specific. Which is why, as I’m overly fond of saying, the story is in the specifics. Yet writers often write in vague generalities without even knowing it.

Like what, you ask? Take a simple sentence like: Freddy had a hard day at work. It’s a fine sentence, except we have no idea what Freddy considers a hard day, what actually happened, or even what his job is. After all, a hard day as a barista in Boise is very different from a hard day as a bullfighter in Barcelona. Be specific. Use the eyes-wide-shut test. If you shut your eyes, can you see it? If not, then neither can the reader.

We don’t like conflict — in real life that is. Ever since kindergarten our goal has been to “work well with others.” So it’s no surprise that conflict can make us uncomfortable. As a result, writers are often way too nice to their protagonist. Instead of plunking him into a really thorny situation, they tiptoe up to it, and then deftly rescue him in the nick of time. Resist this urge.

It’s conflict that readers come for, so they can vicariously experience what they’ve been scrupulously avoiding in real life. They want to know what it would cost – emotionally – to take those risks. And, ultimately, what they might gain.

So be mean to your protagonist, make him face whatever demons are holding him back. It’s not just for his own good, it’s for the reader’s as well.

7. It Must Make Sense to Us

The brain analyzes everything in terms of cause and effect – indeed, we assume that causality is the cement of the universe. So when a story doesn’t follow a clear cause-and-effect trajectory, the brain doesn’t know what to make of it. This can actually result in a feeling of physical distress, not to mention the overwhelming desire to throw the book out the window.

The good news is, when it comes to keeping your story on track, it boils down to the mantra if, then, therefore. If I call in sick one more time (action), then I’ll get fired (reaction), therefore, I better get out of this cozy bed (decision).

Action, reaction, decision—it’s what drives a story forward. From beginning to end, a story must follow a clear cause-and-effect trajectory, so we see the consequence of each action. This tells us what things are adding up to, allowing us to eagerly anticipate what might happen next. Hello dopamine, hello reader!

41 thoughts on “Hook your reader!”