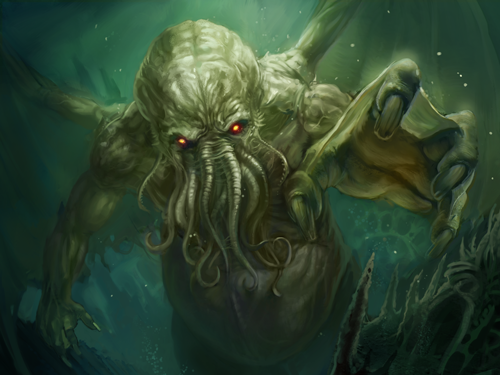 Cthulhu is a fictional deity in the Cthulhu Mythos. He is described as an ancient entity of immense power that manipulates the minds of human beings from his sunken island of R’lyeh. He first appears in H.P. Lovecraft’s “The Call of Cthulhu”, but remains a recurring presence and force throughout the stories in the titular mythos.

The most detailed descriptions of Cthulhu in “The Call of Cthulhu” are based on statues of the creature. One, constructed by an artist after a series of baleful dreams, is said to have

“ …Yielded simultaneous pictures of an octopus, a dragon, and a human caricature. A pulpy, tentacled head surmounted a grotesque and scaly body with rudimentary wings.”

“ …[Another, recovered by police from a raid on a murderous cult,] represented a monster of vaguely anthropoid outline, but with an octopus-like head whose face was a mass of feelers, a scaly, rubbery-looking body, prodigious claws on hind and fore feet, and long, narrow wings behind.” 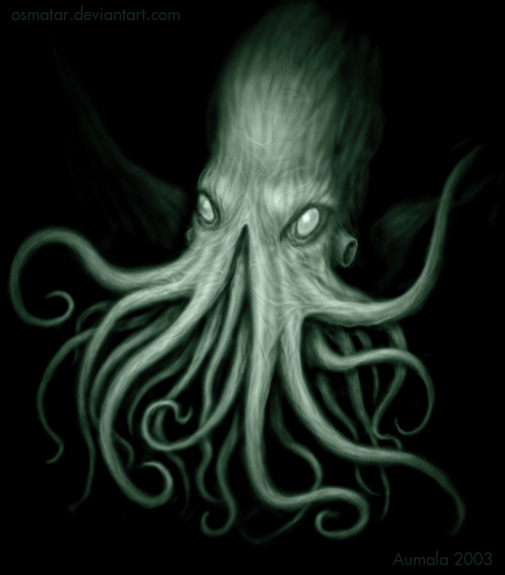 When the creature finally appears, the story says that the “thing cannot be described,” but it is called “the green, sticky spawn of the stars”, with “flabby claws” and an “awful squid-head with writhing feelers.” Johansen’s phrase “a mountain walked or stumbled” gives a sense of the creature’s scale (this is corroborated by Wilcox’s dreams, which “touched wildly on a gigantic thing ‘miles high’ which walked or lumbered about”). Cthulhu is depicted as having a worldwide cult centred in Arabia, with followers in regions as far-flung as Greenland and Louisiana. There are leaders of the cult “in the mountains of China” who are said to be immortal. Cthulhu is described by some of these cultists as the “great priest” of “the Great Old Ones who lived ages before there were any men, and who came to the young world out of the sky.”

Castro, a Cthulhu cultist reports that the Great Old Ones are telepathic and “knew all that was occurring in the universe.” They were able to communicate with the first humans by “moulding their dreams,” thus establishing the Cthulhu Cult, but after R’lyeh had sunk beneath the waves, “the deep waters, full of the one primal mystery through which not even thought can pass, had cut off the spectral intercourse.”
Inspiration

Lovecraft transcribed the pronunciation of Cthulhu as Khlûl’-hloo. S. T. Joshi points out, however, that Lovecraft gave several differing pronunciations on different occasions. According to Lovecraft, this is merely the closest that the human vocal apparatus can come to reproducing the syllables of an alien language. Long after Lovecraft’s death, the pronunciation kə-TH’oo-loo became common, and the game Call of Cthulhu endorsed it.

Cthulhu is the central power in the “Call of Cthulhu” and we get a strong sense of his influence. He manipulates human culture via various iterations of his cult.

3 thoughts on “The call of Cthulhu”